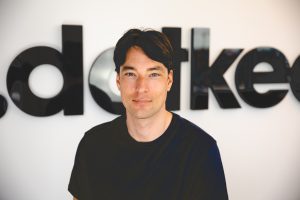 So once again, I’m here with Paul Nicks from GoDaddy. Nice to see you again, Paul.

Thank you, Marcus. Always nice to see you again.

What has happened at GoDaddy since two and a half year? It’s a lot of time.

Last time we were here, we introduced a new CEO, a new vision, a new direction, actually, where we actually told the community for the first time, I think, that we are investing in domain investors, we’re really putting this community as a core part of what we’re doing. Which is interesting, it is a different message.

And then we stopped going to conferences and I stopped being able to talk about progress and all the things we’re doing. So, I actually had the keynote earlier on day one of this conference where I just walked through, okay, over the past three years. Here’s what we’re trying to do. Here’s the direction and this is what we’re building.

So I would say that, what we’re trying to build, what we have built. Obviously, we’ve acquired, we’ve acquired Dan.com recently, we acquired DNAcademy. We acquired Uniregistry pretty much right around the time of the last conference. So, three major acquisitions that all talked to the story of investing in the industry and really creating a solution that makes sense, as a one stop shop, you come, you manage your domain names, you acquire them beat the expiry cycle, you list them for sale. Everything is easy in one spot. It’s what we’re trying to build.

And the numbers talk the talk you’re talking, I mean, correct me if I’m wrong but it was like ”ish” you have like 84-85 million domain names on the management, you have like 24-25 on the aftermarket side. So it’s quite an amount.

And does that reflect, because what we realized, have realized during the pandemic at Dotkeeper, is that our corporate clients from, you know, have a perhaps a little more ”it would have been nice to have this domain name” they went to ”we got got to get this domain name, we really need this domain name because now we have to push out in the digital channels.”

Have you seen that trend as well? I mean, an increase in volume of transactions of corporations actually, you know, going after that specific domain names, or?

Yeah, I think that’s one of the areas when, when we acquired Uniregistry one of the pieces I didn’t touch on because it doesn’t really touch the investors as much. But we we acquired a corporate registrar as well. So Brandsight was a company we acquired and I see corporations certainly using our services, using our brokerage services to get the right name.

So we’ve grown our brokerage service quite a bit and a lot of has been on the strength of brands coming in using a trusted, a trusted intermediary to find the exact right domain whether it be for you know an upgraded, a TLD upgrade. Or shortner or whatever that the upgrade campaign may be, or just to find the right marketing call-to-action type domain, we see a lot of that as well.

But is that like still the main focus you see when you see domain name transactions on the aftermarket, that you go from perhaps .io to .com, you pick up that keyword to like own the space and also the brandables that you’re actually putting out a new brand in the market, you pick up a new name to go after.
Is that like the main?

I mean, you can’t really, it’s so hard to say this is the main intention other than if you’re in the aftermarket, if you’re as a retail buyer, it’s finding a name that resonates with whoever your customer may be. If it’s an .io, .ai, fine, because that’s the tech, you know, that’s the coolest thing. If that’s what you’re trying to go for.

If it’s .com you wanna go more traditional, so it’s like it’s very hard to describe who a retail buyer may be and why they like that name. All we know is we want to make sure we put the name of the new one in front of them at the right time.

So, is there any other trends you’ve seen the last like two years since we met up or looking forward?

I think the the crypto and NFT explosion has happened since last time we were here. And, you know.

A lot of talk about that.

A lot of talk, and that’s it’s been a major cultural story not just in our field but major global story has been the rise of these and people will either be proponents or not. But that has been the big tech story for the past few years. And then everything else with the pandemic, what we’ve seen is this shift from working in an office to working at home, potentially doing, you know, quitting, things like mass resignations, the great resignation.

Yeah. And what’s up from GoDaddy’s side on the aftermarket side especially going forward from here?

Integration. Trying to put all the pieces in place. I mean, again, two and a half years ago we got Uniregistry, Brandsight, DNAcademy, Dan.com. All these separate places. Putting the best of each of them into one cohesive and coherent solution. That’s what we’re trying to do. It’s hard, but that’s going to be the next couple of years, trying to integrate all this stuff.

Thanks, Marcus. Appreciate it.

This website uses cookies to improve your experience while you navigate through the website. Out of these, the cookies that are categorized as necessary are stored on your browser as they are essential for the working of basic functionalities of the website. We also use third-party cookies that help us analyze and understand how you use this website. These cookies will be stored in your browser only with your consent. You also have the option to opt-out of these cookies. But opting out of some of these cookies may affect your browsing experience.
Necessary Alltid aktiverad
Necessary cookies are absolutely essential for the website to function properly. These cookies ensure basic functionalities and security features of the website, anonymously.
Functional
Functional cookies help to perform certain functionalities like sharing the content of the website on social media platforms, collect feedbacks, and other third-party features.
Performance
Performance cookies are used to understand and analyze the key performance indexes of the website which helps in delivering a better user experience for the visitors.
Analytics
Analytical cookies are used to understand how visitors interact with the website. These cookies help provide information on metrics the number of visitors, bounce rate, traffic source, etc.
Advertisement
Advertisement cookies are used to provide visitors with relevant ads and marketing campaigns. These cookies track visitors across websites and collect information to provide customized ads.
Others
Other uncategorized cookies are those that are being analyzed and have not been classified into a category as yet.
SPARA OCH ACCEPTERA
Drivs med