Right now, a robot might be buying your domain.

Hundreds of thousands of domain names expire every day and can then no longer be easily renewed by the holder. But even before the registration is irrevocably gone, your registrar may list the domain in an auction where the highest bidder becomes the new owner - if you miss to renew your domain.

The background is that more and more registrars see the aftermarket as an important part of the ecosystem, and that there is money to be made in offering recycling of discarded or forgotten domain names.

Since late payments are relatively common, it is also becoming increasingly usual for domains with high value to end up in a bidding war – despite the fact that current holders could actually renew their domain.

Sometimes the domain is also renewed and the auction is canceled – much to the annoyance of those who may have spent both time and money trying to acquire it. Other times, the domain changes owner at the same time that it was otherwise deleted by the registrar and transferred to the winner of the auction. In that situation, it will be difficult to get it back.

At the time of writing, the world’s largest registrar, GoDaddy, has several thousand active auctions of this kind with one or more bids. The most active has 150 bids and is up to $ 20,000. Significantly higher amounts are not uncommon. The domain has been used by a medium-sized American company that produces software for weather analysis. In some cases, large retailers in the aftermarket use automated systems, so-called “bots”, to try to win large amounts of auctions of this type.

The reasons why a domain is not renewed are many and sometimes tedious. One of the most common is probably negligence. Maybe the holder has changed email address. Maybe new settings have made reminders end up in the trash. Maybe it has been forgotten or been un-prioritized. Perhaps new managers have taken over a domain portfolio that is hard to manage. Knowing if there is an ongoing auction for the domain you did not pay for renewal is of course difficult, especially if there has obviously not even been enough interest for the renewal in the first place.

If the registration cycle is not cut off by a new owner winning an “Expiring Auction”, it will keep running. When the registrar then deletes the domain that has not been renewed and no one else wanted it, it is still reserved for a time with the registry, and then enters a stage called “Redemption Grace Period”. During this 30-day period, the former holder can restore the domain for an additional fee. If this does not happen either, the very last phase starts for 5 days, as the domain name is “Pending Delete” and completely out of reach for previous holders. 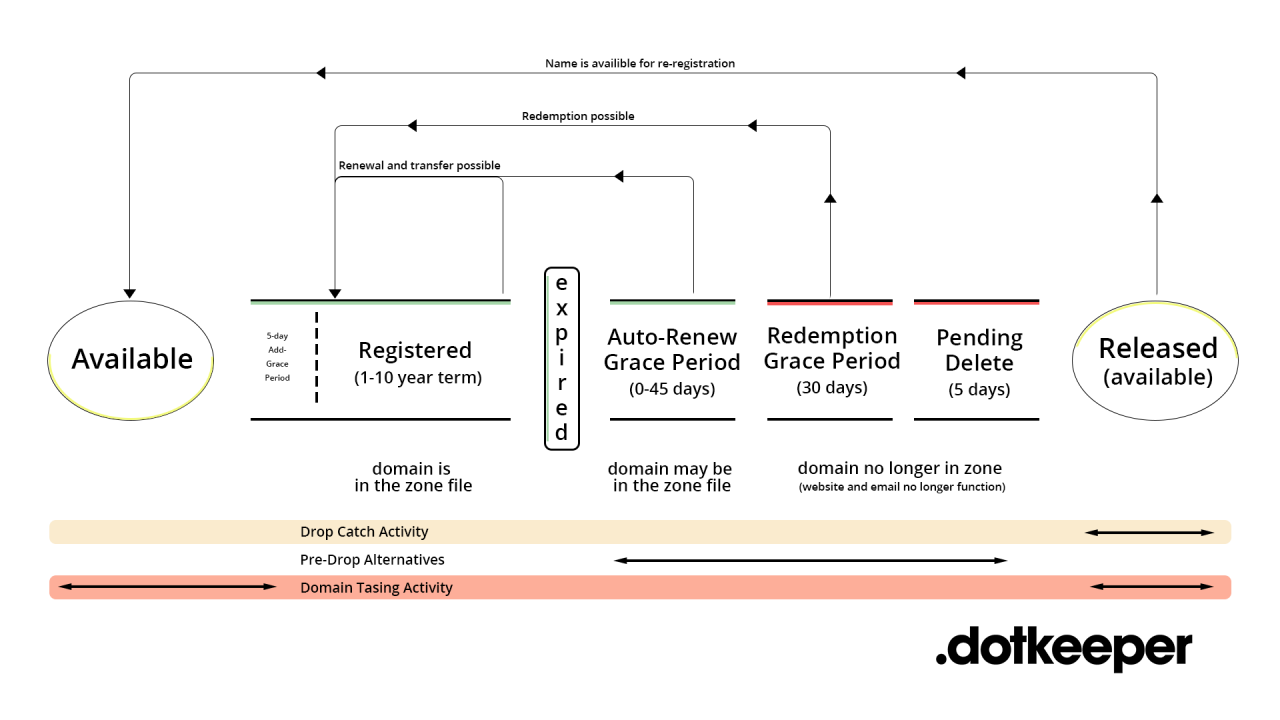 Even in this phase, there are services created for the purpose of bombarding the registry with registration requests in the same nanosecond as the domain is finally released to re-register. These players sell their services under concepts such as “backorder” or “dropcatch”, meaning that anyone can become a new registrant of the released domain for a fee, if the service succeeds in registering it.

In cases where many people place an order for the same “dropcatch”, there will be an auction, where the highest bidder will be the new holder. This category is called “Pending Delete”. The dropcatch service that first manages to pinch the registration is then right in cases where there are more stakeholders to put it up for auction. Here, too, some auctions can reach large sums.

Strategically important or infringing domains? Part 2 of 2 – The Acquisition Route.
We use cookies on our website to give you the most relevant experience by remembering your preferences and repeat visits. By clicking “Accept”, you consent to the use of ALL the cookies. However you may visit Cookie Settings to provide a controlled consent.
Cookie settingsACCEPT
Manage consent

Performance cookies are used to understand and analyze the key performance indexes of the website which helps in delivering a better user experience for the visitors.

Analytical cookies are used to understand how visitors interact with the website. These cookies help provide information on metrics the number of visitors, bounce rate, traffic source, etc.

Advertisement cookies are used to provide visitors with relevant ads and marketing campaigns. These cookies track visitors across websites and collect information to provide customized ads.

Other uncategorized cookies are those that are being analyzed and have not been classified into a category as yet.